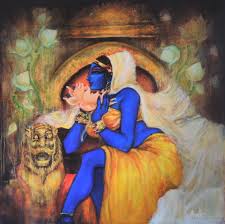 Tamil writer Jeyamohan, whom I've translated in the past, has finished writing his novel series titled "Venmurasu" (The White Drum). The scope of the work is breathtaking. 26 separate standard fiction length novels, over 25000 pages in print, written over roughly 6.5 years. The author serialised the novels, a chapter a day, since 2014. The last chapter of the last novel was published last night.

Venmurasu is written entirely in Tamil, a classical language of antiquity like Latin or Sanskrit, with a rich literary tradition, but still spoken today. It is based on the Indian epic, the Vyasa-Mahabharatha. For non-Indian readers, it's a living story still narrated in oral and art forms, that's centres on an Iron-age civil war in the Indo-gangetic plain. It depicts a time of great social, political and moral transition.

In India, a period that held the seeds for the subsequent emergence of the Nandas and Mauryas and the rise of Buddhism. But it's also a family saga, an internecine bloodbath between cousins; an investigation of dharma, righteousness; a philosophical text; a devotional text.  It includes genealogies, mythologies, moral texts.

Needless to say, it has all the inherent complexity that's just ripe material for a novel. And indeed, narratives in the Mahabharatha (Mbh) have been novelised in literary form in many Indian languages over the past century. Off the top of my head - Mahasasmar (Narendra Kohli, Hindi), Parva (SL Bhyrappa, Kannada), Randamoozham (MT Vasudevan Nair, Malayalam), Yagnaseni (Pratibha Ray, Hindi), Yuganta (Iravati Karve, Marathi), Yayati (VS Khandekar, Marathi), Nithyakanni (MV Venkatram,Tamil) and additionally numerous serialisations and novelisations in English - Ashok Banker, Ramesh Menon, Chitra Banerjee Divakaruni, Kamala Subramaniam, Meenakshi Reddy Madhavan etc. Shashi Tharoor's The Great Indian Novel sets the characters in the context of India's freedom struggle .However, most of the stand-alone novels in this list present the epic from the view of one character (Randamoozham, Yagnaseni) or one sub-story (Yayati) or one perspective (Yuganta).

They sacrifice breadth in favour of depth. Or they are serials with a mostly flat narrative structure, that adheres to the plot of the original epic. Or they are subversions of the original tales, but mostly again limited to one character or perspective, without sufficient space to allow the reader to live and dream. Venmurasu is different from all these previous attempts in multiple ways. In its scope, its formal aesthetics, and its vision. The grandeur and artistic merit that sets this work apart stems from these aspects. Broadly, what Venmurasu does to the Mbh is what Shakespeare did with the story of Donwald to create Macbeth, or what Wagner did with the Norse myths to create the Ring cycle. It refashions the original with artistic purpose to create a greater whole, a parallel, modern epic.

Venmurasu is a modern literary text, a novel series or roman fleuve like Romain Rolland's Jean Cristophe or Emilie Zola's Les Rougon-Macquart. However Venmurasu differs in that each novel in the series has its own aesthetic, narrative form and vision. There are Tolstoyan multigenerational epics, romantic comedies, poetic novels in versified prose, philosophical novels, fantasies, travel and war novels The entire series traverses a whole gamut of characters, major, minor, mythical and invented, running into several hundreds. They abound with all the delight of novelistic detail - landscapes, histories, mythologies and genealogies, recipes and rituals, technical descriptions of iron-age ships, war implements and Chinese telescopes, forays into various philosophical, religious and artistic schools.

Familiar tales are told and retold and subverted in a variety of voices, juxtaposed against each other to create new readings. Folk and subaltern tales, orthodox narratives, modern and ancient myths, women's stories, children's stories and animal stories in a single tapestry. They are layered with the main narrative, resulting in astonishing interpretations and insights into the original epic, that's still living fabric in India. Then, this insight swings the reader's gaze back into contemporary society, where much of the same tensions still exist.

Arguably, the greatest thing about the novel series however is its vision. It is perhaps the vision at the heart of all Indian thought : the nature of suffering, and the possibility of liberation. That alone makes this work a uniquely Indian text. Venmurasu's vision was perhaps first captured by Jeyamohan in a short story he wrote in the 90s, called Padma Vyuham (The Lotus Maze), written in almost the same aesthetic style.

The story is about Subhadra's grief over the death of her 16 year old son Abhimanyu in the Mbh war. Abhimanyu's death came about because he did not know how to find his way out of the lotus maze. Subhadra is convinced that that is his fate. So she reasons that if she could somehow teach him that secret before he's reborn, he'd be protected from such a fate in his next birth. She finds a rishi who can see through time, who tells her that Abhimanyu is already ready to be reborn in another womb. He shows her a lotus, rapidly closing even as he speaks, with two wriggling worms inside. She can talk to him before the petals close forever, he says.

She looks at the two worms wriggling around each other, and asks the rishi, who is the other one. "That's Brihatkayan, the former Kosala king," he says. He had been killed by Abhimanyu in the war, but they would be twins in their next birth. Subhadra is horrified. "You brother is your mortal enemy, beware of him," she cries out, even as the rishi reminds her of the lotus maze. But before she can get to the secret of the lotus maze, the petals close tight over the worms. Subhadra tries frantically to prise them apart, to no avail. Doubly thwarted, Subhadra laments her own fate, when her brother Krishna quietly asks her if she knew how to escape from her own maze. She is stopped short by the question and in a flash, the chain of events that she has set into motion unwittingly dawns upon her.

The Lotus Maze' encapsulates the themes that are played out to grand effect in Venmurasu - deterministic fate that links human lives, suffering that cycles over generations and births, and for most part, the utter incomprehensibility that baffles man in the face of such madness.  The aesthetic lynchpin that holds the tale together is the symbol of the lotus maze, a tightly circular war formation, always in flux, that is easy to penetrate but highly difficult to escape from. In the story, the lotus maze becomes a symbol for fate itself. Thus a minor tale in the epic expands into a much grander theme.

Venmurasu uses the same technique to much greater effect - over a 26-novel cycle, the canvas is much broader. The novel thus becomes a simulacra of life itself, but one that stretches our perceptions out Thus, this is not a novel about the Mbh, or a retelling, or even an alternative narrative. It is, like every great literary text, a parallel life, but one that uses imagery and archetypes from the Mbh to deepen and broaden the scope of its inquiry. Book lovers often have periodic obsessions - often discovering an author and reading all their works one after the other - or getting hooked onto a series and getting into fandom mode for years.

People my age can relate to our obsession over Harry Potter in our teen years. With the books releasing every couple of years or so, there was pre-booking, braving long lines and often finishing the whole thing in two or three days only to call a friend and discuss all the highlights, open questions (and 'ships). HP was no classic, but now I realise its ppeal was due to its faux classicism. Its archetypes and narrative tropes help to tell a compelling, eternal story, even as the milieu is utterly fresh. Venmurasu is literary fiction, but I'm amazed by how popular it is for such a niche work. I think it's fundamentally because it just tells an amazing story. I started reading it in 2018, four years after it started coming out, and I have read 18 out of the 26 novels published so far. There are a few dozen people who followed along, reading a chapter a day, and have finished all of it.

The fandom is thus fundamentally different, immersive, almost meditative in quality. The basic frame tale of the Mbh is also well-known, so the reading and discussions would often not be about what had/would happen, but how the tale was told. Like rasikas in a Carnatic concert discovering something new in the rendition well-heard kriti, or a connoisseur finding a nuance in a master batsman's classic shot, the reading was often about the manodharma, creative interpretation. But the whole effect is rather surreal. One one hand we are immersed in the colours of individual tales and their interpretations.

For example, the mythological tale of the competition between Kadru and Vinata is layered with the stories of Gandhari and Kunti. Such treatment deepens our feeling of the conflict at play, pulling our emotions in, keeping us invested in the play. On the other, even as we read, we are subliminally aware of the inexorable pull of fate that we are powerless to do anything about. In the grand picture, we are confronted with the immense bleakness of war, death, destruction and endless eternal suffering, in the face of which all former whims and rivalries pale. All this adds up to a sense that on one level, everything matters, all our passions and conflicts, truly and deeply, for they chase us through genealogical and mythical time - and we have no choice but to act through life soaking up all their colours, with all the intensity of children absorbed in play. But on the other hand we are fundamentally helpless handmaidens of these selfsame wills, and fate itself, so none of this can matter at all in any essential sense. We are left with a simultaneous sense of grandeur and emptiness, illusion and rude awakening, meaning and the lack of it, in the face of historical, social, political, moral and personal upheavals. The conundrum of life itself is evoked thus.