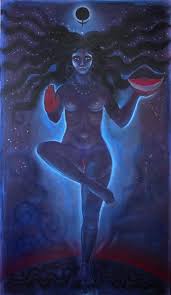 
One day Adiyogi is simply walking, totally intoxicated – not on any drink or drug, because he is the drug. Completely inebriated, devoid of any clothing, in naked splendour, with a garland of wildflowers he is simply walking through the forest, like any other creature. You don’t look at a tiger and think “Oh my god, he is naked!” You thought he is wearing striped pajamas or something?He is simply walking like any other life.
Then he happened to walk into a place where a certain scholarly group has built a small habitation, doing something like a side-track spirituality: reading scriptures, doing mantras, etc. A very chaste and orderly group of people.

This wild man just walks in completely unconscious of what’s around him, because he is too engross d with what’s within him. He walks in – the men were all doing their sacred duties, the women were doing their house work.The women saw this creature – just the splendour of his existence. They looked at him, and that was the end of their civilization. They lost all of what they had taught. From age 8-18, everyone gathered around him and was just going into pangs of ecstasy – some trying to touch him, just to taste and see what he is. Some were climbing his tree-trunk like body. But he is simply unaware, completely unconscious of what they are doing. The entire womenfolk gathered around him. The men came and saw there is something to the man, but their main concern is the society, ethics they have formed. The civilization stones looked like they all crumbled at once. This is not just one woman falling in love – the entire women of the place.

The men came to Adiyogi and said, “We have heard of you, but you cannot just walk in. This is not ok, you are dismantling everything we have built. You have put the entire civilization in danger. But still he was so intoxicated that he did not notice.Then one man pulls out a sword and pokes him. Only then Adiyogi looks around, sees all these women, begins to hear them saying how he is a threat to civilization and family structure.
Adiyogi just shrugged, “What’s the problem?” They said, “Don’t you know you’re naked?” Then the sword that the man had used, this sword, he took it and lopped off his own genitals – if this is the problem, then take it. He left it there and walked off.
His genitals stayed there and became a shaft of light – this is known as Kashi..
What this parable is trying to tell you is that, whatever one thinks of as the lowest, even that can be transformed into the highest. He could have used his finger, his head, but he used something that you are looking down upon. The story is also trying to tell you that pleasure and ecstasy is not only in one part of the body.
If you are poor, you have only one meal a day. If you are rich you can choose. The idea of richness, affluence is to have a choice of food, then later on a choice of lifestyles. If you are very poor, money means food. I can eat anything I want. So pleasure means particular part of body.
What Shiva is trying to display is, every cell in the body is ecstasy. This is not sexuality, this is spirituality. Wherever they touch him, they are all going into wild ecstasies. This dimension where just a look or a touch can send you to nameless ecstasies – on one level we have enshrined that dimension into the Yogeshwar Linga. There is a certain way to access this. You must come some day and find that.
There are 2 dimensions – one is of extreme discipline. One is of absolute abandon. One brings painful precision. Another brings nameless ecstasies.